I met Greg in a coffee shop sometime in the Fall of 2007. We both used to frequent this coffee shop back then called the Coffee Pub. It was open until midnight in the Summer and I would go there and get a large coffee and sit and read every night from seven or eight until they closed. (Now it is called the RedEye but is ironically open only until 10.00p.) Greg and I were both regulars at this place, but we didn't know one another at all. Occasionally we would catch each other's eye, but nothing came of it. I thought he was really cute (obviously) and so I kept hoping A) that he was gay and B) that he would come talk to me. He wasn't gay, but we did finally meet. 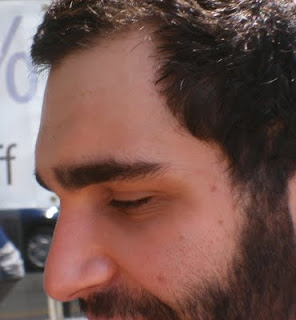 It was because someone at the Coffee Pub introduced us. The night we met Greg sat down with me at a table outside and we talked about movies for two and a half hours without stopping. I had a serious friend crush on him. We hung out all the time after that, mostly at the coffee shop, playing Clue with strangers, and chattering incessantly about movies. It was awesome. Who plays Clue anymore? Greg usually won.

We went to a couple of films together, too. Todd Haynes's I'm Not There., I remember. Not sure if I can remember anything else. Who knows. I used to try to get Greg to come to all my social events, but he was not having it back then. 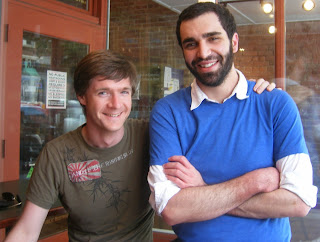 Greg moved away in '08 and we became long-distance friends. He started writing poetry and I fell in love with his work. He was a short-story writer before that, and I thought his work was interesting and good, but as a poet, Greg is a genius. He is also an excellent performer of his own stuff, delightful to watch, and impishly charming. He criticizes me about my own taste in poetry (Bob Hicok he approves of, Tony Hoagland he does not – he's wrong). I didn't see him for some years after that, even though we were in constant contact.

But in the summer of 2010, I was in Virginia for two weeks and called Greg up. He was in Blacksburg and I was in Amherst and we both drove to Roanoke and spent the afternoon together walking all over Roanoke. It was the loveliest day. Greg is a wit as well as a poet, and we wind up finding new words for things when we're together, and new ways of teasing each other mercilessly. 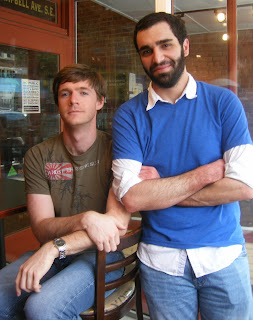 Greg loves passionately and writes beautifully, and I am grateful, always, for both. And when I say that he writes beautifully, I mean, of course, that he writes himself. I cannot read anything he writes without seeing him totally transparent in his words. His work is simply extraordinary and the honesty and clarity with which he is able to express his own feelings, fears, obsessions, and affections is really amazing to me. I have shared his poetry with many of my friends, and if you haven't read any of it, you really must check his work out here