When I first met Liz I was welcoming her to Florida State as a student recruiter. The faculty were really excited about her and wanted me to make a good impression. I even had to have a phone conversation with one of the faculty about how important this visit was. I met Liz on my birthday, then, in 2007. Appropriately we met at a bar. (Hey, it was my birthday.) Actually it's totally appropriate because it's me and Liz. She was quiet and a bit shy (intimidated?) at first, but she warmed right up and we were talking about theatre and what we liked and disliked in no time. 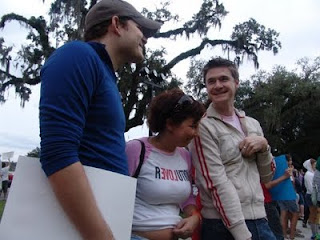 When Liz arrived on campus she arrived as a whirlwind – immediately the social organizer and wild child of the department, with pink hair and five-inch heels. I was, obviously, charmed. And even more charmed was I by her ability to make ridiculous jokes about theoretical principles. I can't remember any of them now, but we had numerous running jokes about Derrida and Freud. And we used to crack ourselves up by joking about the constant use of the parenthetical (re) in academic writing. You know the one I mean: (re)membering (re)historicizing, (re)collection. Liz and I started making jokes like (re)bellion and (re)alism and p(re)datory and mo(re). We would be cracking each other up with this stuff.

Liz got me through all of my theatre history classes, too. We had four theatre history courses together and we would have to sit across from one another so that we could communicate silently during class, and then when class was over we would call each other and decompress the day's events, arguing with statements the professors would make which with we were not allowed to argue in the classroom. This was a great relief for me for the full three years of school that Liz and I were here together. We would go through these arguments together, fully discussing how best to think about the problems with which we had been presented, changing the questions, reforming the approach. Her approach was almost always through nationalism and mine was almost always through gender and sexuality. We found ourselves constantly overlapping with our questions. (As it turns out, the nation and gender are deeply embedded with one another. Who knew?) 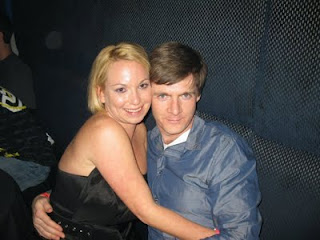 Liz and I have also loved to spend an evening drinking unholy amounts of wine at each other's houses in Tallahassee or at the delightful Clusters & Hops. Grad school can take a lot out of a person and make one need a lot of (a) wine, (b) cheese, and (c) emotional hand-holding. Liz and I have been able to do that for one another, especially when we were the only PhD students on campus for a while, and I have been and continue to be so grateful for our relationship and the way that we have been able to support one another.

I also appreciate Liz's generosity, her ability to insist that we take care of ourselves, to move away from work for a while and spend time doing what I always call care of the self. This doesn't just mean drinking (although it obviously includes it) but going to the opera or to dance performances or just sitting down and having a nice meal and sharing some cigarettes (none for me, thanks) with friends. Liz also always participated in Ryan's gay soul washing events. With Liz, the soul-washing isn't always gay, but it is often a really really healthy step away from the behemoth power of the graduate-school grind. 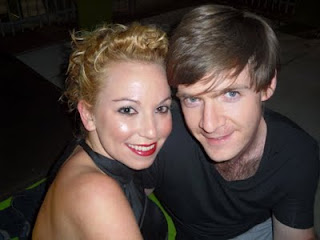 Liz is in South Florida now, and I haven't seen her in quite a while – almost a year, actually – but she'll be up to Tallahassee to visit in a few weeks and I see a trip to Clusters & Hops in our future...
Posted by Aaron C. Thomas at 11:59 PM