Last night Drew and I watched Andrea Arnold's Fish Tank from last year's movie season. It's been released on DVD by the Criterion Collection, which is why I first took notice of the film. (It ought simply to be a fact in all of our lives that any movie released by the Criterion Collection automatically deserves our notice; I treat a Criterion release as though a person whose opinion I deeply respect has given a film a stamp of approval.)

But I have to be honest: the real reason I rented this movie was that it contains a performance by Michael Fassbender, who in the last couple of years has become one of my favorite actors to watch. He gave one of my favorite performances of 2009; he is flat-out brilliant in Steve McQueen's Hunger, and I recently enjoyed his work in Jane Eyre and (though I thought the film was fairly asinine) in X-men: First Class, as well.

But never mind Michael Fassbender, because Fish Tank is not about him. 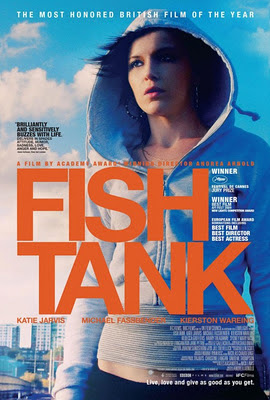 Fish Tank is about poverty and living in a world where there simply aren't a lot of choices. And Fish Tank is about bad – bad, bad, bad – decisions, and how sometimes we can't stop ourselves from making them because we feel powerless and don't know what to do.

My roommate and I watched this film and talked back to it almost throughout its entirety, frustrated with the choices the characters made and wishing we could talk sense into them and knowing that was impossible. Fish Tank is troubling in many ways, and often extremely uncomfortable to sit through. We changed our loyalties to the characters many times throughout the film, and fought among ourselves about responsibility and proper behavior, as well as horror and taste (this girl thinks she is a dancer, but Drew and I agreed she is most definitely not).

Part of the pleasure of the film, it seems to me, is its ability to make its audience squirm in its seats. If this doesn't sound interesting, Fish Tank is definitely not for you. It won't be fun for most people, I'd wager.

But wow. This film is excellent. I absolutely loved it, I enjoyed it entirely, and I've moved it into my top fifteen for last year.
Posted by Aaron C. Thomas at 12:14 PM