I do not often think about what I want the theatre to do. At least anymore. The last full-length play I directed was over two years ago and it accomplished exactly what I wanted it to do, but I am not a director at our School of Theatre (nor would I wish to be). At any rate, I am usually busy thinking about how the theatre works, what it is trying to do, and I only rarely think about what I would want it to do were I in charge in some way.

And yet... I assigned sections from Antonin Artaud's The Theater and Its Double to the students on Tuesday and I find reading Artaud so exciting! I assigned him to them because of his theories about how watching violence can impact the spectator, but it is his theories about the theatre itself and its capabilities which I find the most invigorating.

In his discussion of the plague,
for instance, Artaud says:

The state of the victim who dies without material destruction, with all the stigmata of an absolute and almost abstract disease upon him, is identical with the state of an actor entirely penetrated by feelings that do not benefit or even relate to his real condition. Everything in the physical aspect of the actor, as in that of the victim of the plague, shows that life has reacted to the paroxysm, and yet nothing has happened.

The theater, like the plague, is a delirium and it is communicative.

The theater restores us all our dormant conflicts and all their powers.

If the essential theater is like the plague, it is not because it is contagious, but because like the plague it is the revelation, the bringing forth, the exteriorization of a depth of latent cruelty by means of which all the perverse possibilities of the mind, whether of an individual or a people, are localized.

Like the plague the theater is the time of evil, the triumph of dark powers that are nourished by a power even more profound until extinction. 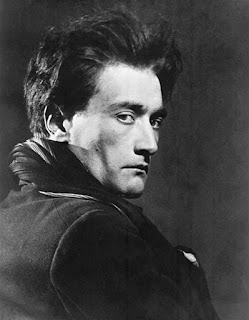 And he has the audacity to conclude that:

All the great Myths are dark, so that one cannot imagine, save in an atmosphere of carnage, torture, and bloodshed, all the magnificent Fables which recount to the multitudes the first sexual division and the first carnage of essences that appeared in creation.
The theater, like the plague, is in the image of this carnage and this essential separation. It releases conflicts, disengages powers, liberates possibilities, and if these possibilities and these powers are dark, it is the fault not of the plague nor of the theater but of life.

And if Artaud is fond of what he calls cruelty, it is because, like the theatre itself, cruelty is excessive, unnecessary, gratuitous.
Posted by Aaron C. Thomas at 12:00 PM