I remember reading that Piñero had problems, but I also seemed to remember that there was a bit of Oscar buzz for Benjamin Bratt at the time that Piñero was released (2001).

In any case, I will be writing about Miguel Piñero's play Short Eyes in my book, so I wanted to (finally) watch Leon Ichaso's film about Piñero. It is a disaster. 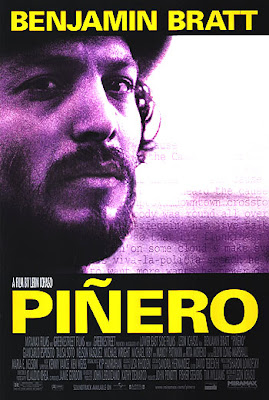 First off, the film jumps back and forth in time, beginning in Sing Sing prison in 1972 or so, jumping to 1974, jumping again to 1988, and then also occasionally back to Piñero's childhood.Now, Denis Villeneuve's Incendies, for example does this and it is not confusing, so I am not objecting to jumping around in time per se, but in Piñero most of the time I had no idea when or where we were. It was downright confusing. Now they're fighting, now he's been forgiven, now they're sleeping together, I don't get it. This actually made the film downright incoherent.

Worse, the film feels guilty for liking Piñero himself and so the movie is, more than it is anything else, a kind of apology for who Piñero was. Honestly, this made me uncomfortable. Piñero was a troubled guy, erratic, he hurt  a lot of his close friends, he was an addict, and he finally couldn't get his act together and died of cirrhosis of the liver. But... the film shows us that all of these friends loved him deeply; they are all, for example, at his funeral in the lower East Side. So why does the movie spend so much time showing us what a jerk Piñero was? Why did people love him? The film ignores this aspect of Piñero – we don't see the opening of Short Eyes, we don't see his friendship with Joe Papp, we only see the tortured side of his love affair with Sugar, his main female interest, and the film totally short changes his sexual relationship with playwright Reinaldo Povod.

The whole thing was just so strange. Piñero didn't necessarily need to be a celebration of this guy's life, but why is Piñero important? I daresay he is quite important, having founded the Nuyorican Poet's Café with Miguel Algarín, but Piñero seems much more interested in criticizing its main character than in anything else. I mean, why make a movie about a guy you don't really like all that much?
Posted by Aaron C. Thomas at 10:52 AM