The little terrier on the poster talks. And this film is really charming... for a while.

There are a lot of good things to say about Beginners, and I was with it for a really long time, so I will start there. The film charts the story of a man in his late thirties who has been unlucky in love as he embarks on a new, quirky relationship with the completely wonderful and equally quirky Mélanie Laurent (who you will probably remember from Inglourious Basterds). Beginners also tells the story of the death of the man's gay father, which happened right before he starts this new relationship. The film moves back and forth from the present (romance) the immediate past (loss and mourning) and the man's childhood (also quirky and very interesting). I want to note how easily the film moves back and forth between these storylines without ever having to flash dates up on the screen. Beginners is never confusing; I never once thought okay when is this? I note this because I feel like I have recently seen quite a few films that have a lot of trouble keeping track of time. 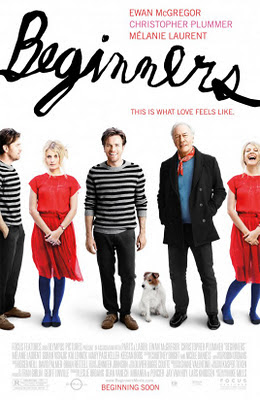 Okay, so Beginners is about dealing with a gay dad who has recently come out at age 75, falling in love, and trying to be happy, and then it is also about mourning his father, mourning his mother, and trying to grow up. The film actually manages to do all of these things. The performances are great – Christopher Plummer is a particular delight – and much of the script is clever and not so whimsical as to be annoying. The actress who plays Plummer's wife, Mary Place Keller, is extraordinary and is probably the film's best feature. I also think Beginners is pretty smart about sex. Also, Mike Mills (who directed Thumbsucker, a film I love) manages to constantly historicize various events in the film, by quickly charting who was the president when certain things happen, what pretty looks like, what happy looks like, keeping things in perspective.

There is a great moment late in the film when Ewan McGregor's character says that he and his girlfriend feel sadnesses in a way that their parents would never have had time for. This was my favorite moment in the film and I felt it as a kind of relief. This is because Beginners is rather a depressive film about two depressives trying to love each other. As such – and I hope this doesn't sound too unkind – I became irritated with the characters in act three.

Cheer UP, y'all, I kept thinking.

I suppose, though, that in a film that has two very distinct storylines, it is normal for one of those to stand out as more interesting than the other. I loved the father-son stuff throughout, and I loved the romantic stuff for most of the movie, but after awhile the romantic self-destruction of these two frustrated me. And this was probably because the other story was so compelling; the film itself invited comparison between the two narratives, and the father-son tale, in my mind, won out. Still, if you liked the whimsical, slightly depressive tone of (500) Days of Summer, Beginners will totally be your cup of tea.
Posted by Aaron C. Thomas at 3:57 PM