I know I am way behind on reading Jonathan Safran Foer's Extremely Loud & Incredibly Close. I buy books or books or given to me and then they sit on my shelves for a long time without me ever looking them. There are just too many! It's a curse. But after I saw the trailer for the new film (which is directed by Stephen Daldry) I immediately took the book off the shelf and committed to reading it. It only took me two days, which probably means I should actually take the time to read a novel now and then since they don't take me very long.

For me this trailer looks a little... schmaltzy. (I particularly object to that song at the end. What the ?) I am guessing it's just the trailer, though, because Stephen Daldry's first three films were Billy Elliot, The Hours, and The Reader, which are all superb movies that manage to be moving without ever being cloying.

The book, though. The book is really wonderful. The main voice in the novel is a young boy, and though I have started to lose patience with stories told from the perspective of young boys, Foer switches the book up with other voices enough that I didn't get tired of our little autistic narrator. But for me it is Foer's own presence in the book that comes through the most. He places the destruction of the World Trade Center next to the 1945 bombing of Dresden and also next to the bombing of Hiroshima. 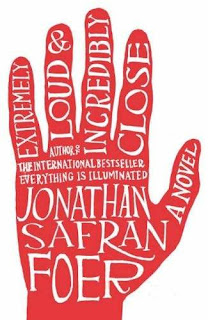 And then it is a book about mourning for loss, and the importance of reminding those we love that we love them, and how much we can be connected if we wish to make connections with one another. And about parenthood. One of my favorite passages comes near the very end of the book (don't worry I won't spoil anything). The narrator is talking to a limo driver in the middle of the night:

Gerald smiled at me in the rearview mirror and asked if we wanted any music. I asked him if he had any kids. He said he had two daughters. "What do they like?" "What do they like?" "Yeah." "Lemme see. Kelly, my baby, likes Barbie and puppies and bead bracelets." "I'll make her a bead bracelet." "I'm sure she'd like that." "What else?" "If it's soft and pink, she likes it." "I like soft and pink things, too." He said, "Well, all right." "And what about your other daughter?" "Janet? She likes sports. Her favorite is basketball, and I'll tell you, she can play. I don't mean for a girl, either. I mean she's good."

"Are they both special?" He cracked up and said, "Of course their pop is gonna say they're special." "But objectively." "What's that?" "Like, factually. Truthfully."
"The truth is I'm their pop."

I don't know where I read that this is the first great book about 9/11, but I think I have to agree.
(Side note: Foer is married to Nicole Krauss, who wrote Great House – the best novel I've read in years – and The History of Love.)
Posted by Aaron C. Thomas at 12:00 PM