The Briefest of Reviews from 1973 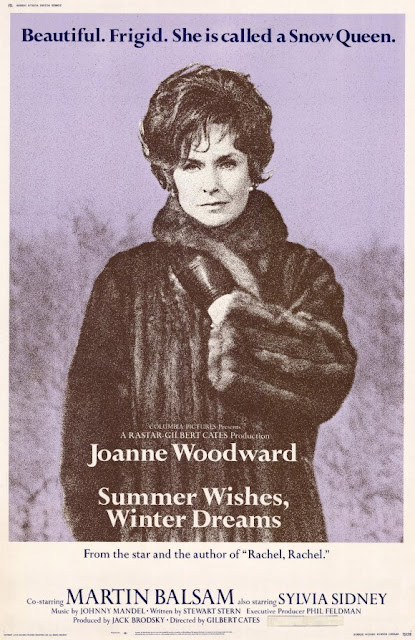 Well this is a little weird. I don't know if you know this, but Sony Pictures is releasing films on DVD-R on a manufacture-on-demand basis. These are movies that the studio cannot really afford to release on DVD to the general public (there is not enough of a demand for these films). So what they are doing instead is allowing people to order the DVD for around $20 and then they burn the movie onto a DVD-R and send it to you. Universal is doing this too. They're calling it the Universal Vault Series. You can actually buy these movies via Amazon.com, so the whole thing is very very easy. And we all have better (if a little expensive) access to hard-to-find films. And if you really want to see these movies, $20 is not so bad.

So I ordered Summer Wishes, Winter Dreams a few months ago when I was watching all of those movies from 1973. But I only watched it a couple days ago.

The movie is odd – a smallish sort of melodrama about a woman who is emotionally disturbed and can't seem to find her way in the world, her relationship with her husband, her children's lives, her mother's death, etc. I was interested in this film because I love Joanne Woodward and because it is about her dealing with her son being gay (evidently a big deal in 1973, oh yeah, it still is in 2011).

I don't know. It is not a film to get excited about, really. The acting is wonderful from all involved, and it is interesting in a museum-piece kind of way. I am glad I saw it, but that's about it, I think.

The weird thing is that after keeping this flick on my shelf for a few months and then finally watching it, the film's director (who was also the producer of the Academy Awards show for many many years) died suddenly. So strange how the universe is: I watch my first Gil Cates movie (no one watches his movies anymore) a few days before he dies. It's all just such a fluke.
Posted by Aaron C. Thomas at 11:11 AM