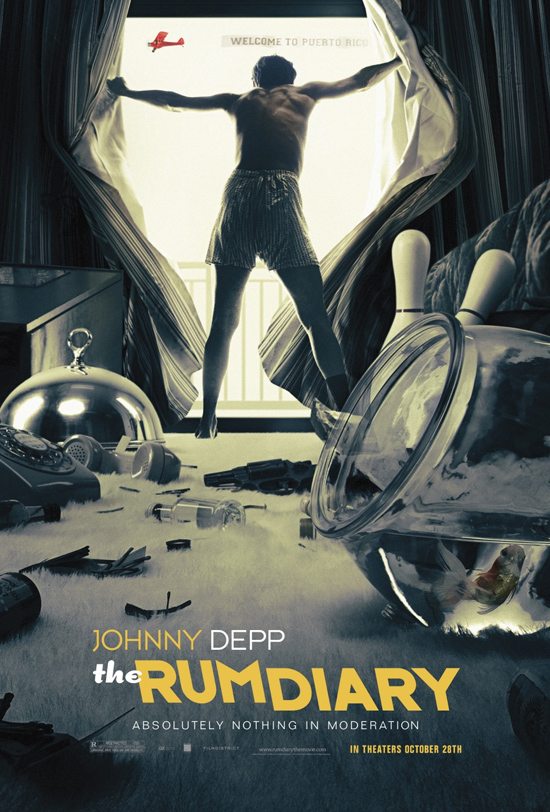 Seriously: I don't get it.

The Rum Diary is a disaster. I can't say I totally hated it, but it was almost unbearably boring. The imdb synopsis of this film says that "American journalist Paul Kemp takes on a freelance job in Puerto Rico for a local newspaper during the 1950s and struggles to find a balance between island culture and the expatriates who live there." Okay. Sure. Sometimes the movie is that.

Mostly the movie is simply a collection of nonsensical scenarios, grotesque characters, and slow-motion photography. The Rum Diary is (it seems to me) attempting to find a productive tension between a fun drug-trip movie and a film about a man who comes to political awareness in a colonized land (something like, say, The Year of Living Dangerously), but mostly The Rum Diary can only achieve silliness.

The film is filled with silly and unique characters, none of whom is particularly fun, and then there are the villains, of which there are quite a few, who all have decided to play their roles with a sort of stock-villainous flair. And Johnny Depp gets drunk a lot and plays drunk a lot, mugging around the movie with the same faces we've seen in other drunk Johnny Depp movies.

And then the movie turns and wants to be a film about the exploitation of Puerto Rico and other northern Caribbean islands by greedy capitalists in the 1950s. And we are all supposed to immediately understand (though the film has been mum on the topic for at least its first sixty minutes) that Paul Kemp is really struggling to help the exploited islanders (not one of whom is a character with more than one line) and speak for a free Puerto Rico.

But the drunken haze with which with the film began cannot be shaken, and The Rum Diary remains a film for teenage boys who've never had more than a few drinks and never had sex with a woman (and endlessly fantasize about both). If the movie is never a movie about a political cause (and it is not), neither does it ever manage to be a fun movie about drunken debauchery or hallucinogenic trips. My companion Jon and I had a debate after The Rum Diary was over because I thought it must've been a PG-13-rated film since it was so tame. Jon said (correctly) that the film was rated R, but that we had the debate at all should tell you plenty. The Rum Diary has no nudity (None. Seriously.), very little drug use, and a single scene with a computer-generated tongue extending too far out of a guy's mouth.

The bottom line here, is that The Rum Diary is a cartoon version of an early Hunter S. Thompson novel. And it is not a film for grown-up people. It is a movie for adolescent boys that only looks like a movie for adults.
Posted by Aaron C. Thomas at 12:41 PM