While writing my dissertation I am making it a point to always go back to the original source. I am quoting hearsay, viewers' experiences of certain pieces of theatre, that sort of thing, and reviews are paraphrased and taken out of context and made to appear more positive than they originally were – all sorts of things. Biographers and other writers are trying to tell their own stories, so it makes sense that they would place things in a certain light.

Which is why it's always good to go back to the source. (Plus, the Chicago Manual of Style says to.) I've always thought, incidentally, that when authors used the old parenthetical phrase "quoted in..." that it betrayed a kind of laziness on their parts, and I am interested, generally, in always projecting my own hyperproductivity. (Just keepin' it real, y'all.)

When Pamela E. Barnett quoted Amiri Baraka in her book Dangerous Desire: Literature of Sexual Freedom and Sexual Violence since the Sixties, which is a fascinating read, I looked up her source. She is quoting Baraka's essay "American Sexual Reference: Black Male," which begins (provocatively) "Most American white men are trained to be fags. For this reason it is no wonder their faces are weak and blank, left without the hurt that reality makes—anytime. That red flush, those silk blue faggot eyes." Etcetera.

Silk blue faggot eyes. I've got to read the rest of this.

Except that this is what Barnett's source looks like. 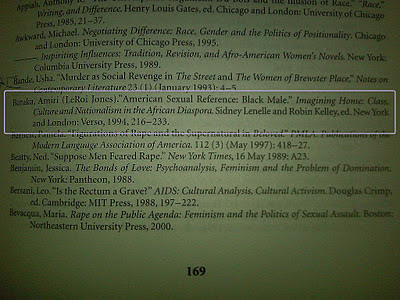 Aside from the fact that Sidney J. Lemelle spells his name with an m and not an n and that both he and Robin D.G. Kelley are usually cited with their middle initials, their book does not include Baraka's essay – under the name LeRoi Jones or any other name. And anyway Baraka's essay is not from 1994; it's from the mid-1960s: an enormous difference.

I cannot tell you how many times this same thing has happened while I have been working on this dissertation. And I have only been working for a couple months so far. Issues of journals are dated incorrectly. Pages numbered wrong. Titles wrongly reported. It happens all the time.
Last month I came across a quote about John Osborne where the author had inserted into the quote the brackets [African-American playwright] John Osborne. Osborne is neither African nor black nor even American.
And a book that has impacted me in a huge way cites an essay by Warren Beatty Warner from Diacritics 13.4. I always thought it was weird that this guy was named Warren Beatty Warner and it wasn't until I looked it up that I realized that that isn't his name at all. It's William Beatty Warner. (P.S. I love Warren Beatty.)

I am not sure where this post is headed, really, but, well, all of this inaccuracy sort of bowls me over. I clearly do not want to write this chapter on which I am working. Instead I am posting about other people's bad record-keeping.