Tim Burton's Frankenweenie was so cute! I almost always like Burton's animated films much more than I like his live-action business, and Frankenweenie is charming. Burton's movie is a tribute to old-school science-fiction-horror movies, and already in its first few moments it pays tribute to Ishirō Honda's 1950s classic Rodan.
In Burton's version, Rodan is defeated (chewed, really) by the wiener dog of Victor Frankenstein (a middle-schooler in a town called New Holland). The plot of Frankenweenie is put into motion by two important events: the arrival in the town of a new science teacher (Mr. Rzykruski, played by Martin Landau) and the death of Victor's beloved pooch because he foolishly runs out in front of a car during a little league baseball game. 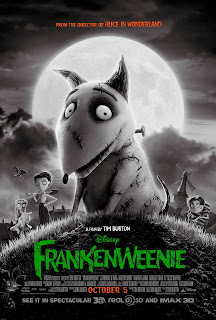 Victor, as you can imagine, brings little Sparky (haha) back to life in a miniature version of Mary Shelley's Gothic novel. When his classmates (who are the weirdest kids you've ever seen) find out about this, they become very jealous and all want in on the action. Mayhem ensues as each attempts to bring something back to life. Little Toshiaki tries Victor's technology on his beloved dead turtle Shelley (this movie is charming) and inadvertently produces a Godzilla-like monster (more Ishirō Honda) who storms the town and terrorizes the residents of New Holland.

Victor and Sparky, of course, come to the rescue, and many lessons are learned at the end. Most importantly Victor's dad learns that "sometimes, adults don't know what they're talking about."

Burton's movie is about science and responsibility and getting kids to fall in love with scientific experimentation and with learning itself. It's a film about loyalty and honesty and what it means to be a good friend. The parts where Frankenweenie directly addressed the villagers' fear of science and their total ignorance in the face of reality, were probably my favorite bits. This is a movie that believes in science and is excited about research questions!

Frankenweenie has a great cast – Catherine O'Hara, Martin Short, and Winona Ryder – a lovely Danny Elfman score, and is filled with tongue-in-cheek references to both classic horror cinema and old-school Tim Burton movies. Even if you aren't up on your classic horror (and I by no means am), you'll get many of these little nods, but either way, Frankenweenie has plenty of grotesque cuteness to keep you happy all the same.
Posted by Aaron C. Thomas at 12:37 AM