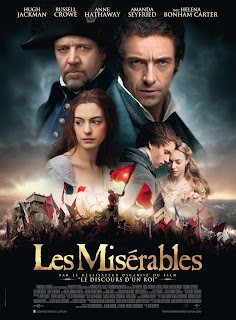 I didn't quite hate this movie – I posted about some of Les Mis's good qualities here – but this is definitely one of the worst movies I saw all year, and the love it is getting from people who hand out awards all across the country this season just baffles me. This is going to be mean, but: for me the film version of Les Mis is like watching a community theatre try to put on the show, except that the community theatre is Hollywood and the audience is just proud of these actors for doing their best. It's kind of like if our own six-year-old tried to sing Jean Valjean and we decided to give the little guy an Oscar for trying so hard. Still, people seem to love it. Expect Anne Hathaway to win this year's Renée-Zellweger-in-Cold-Mountain Oscar, and I suspect it will probably win for Sound, as well.
Will Win: Supporting Actress, Sound Mixing
Could Win: Makeup, Song
My Rating: #53 out of 61 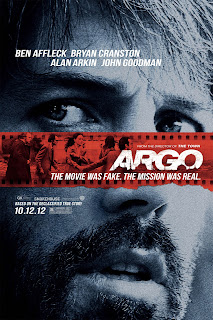 This is a really good movie, and I am expecting it to win Best Picture. After I first saw Argo, I really didn't think it could pull off the big trophy, and I still have my doubts, but somehow I feel like critical consensus is going to form behind this film before all of the voting is done in February. "Argo fuck yourself" is still one of the funniest lines of the year in any movie, and the picture is strong, moving, and filled with tension. I've even put it down as a possible contender in the Best Director category. I've heard that a write-in campaign is afoot, and that folks are trying to get Ben Affleck the Best Director Oscar even though he wasn't nominated. Seems like a longshot, but if there's that much buzz about the movie, it seems to me that the consensus really is forming.
Will Win: Picture, Sound Editing
Could Win: Director (?), Adapted Screenplay, Film Editing, Score, Sound Mixing
My Rating: #11 out of 61 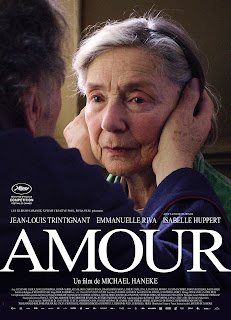 Love love love. For me, Michael Haneke is someone with whom I don't necessarily feel comfortable. I feel very strongly about almost all of his films. I hated Funny Games but I loved Caché. There are a lot of strange and wonderful movies in this guy's oeuvre, and you will be hard pressed to forget the ones that you have seen. The White Ribbon, The Piano Teacher, Amour: these are unforgettable films whether you love them or hate them. Amour is the story of a man who takes care of his wife after she has a stroke. It is a meditation on a true test of love. I found the film powerful and deeply moving, and I wager that most people in the Academy will too. When I saw the movie in December, the audience afterward stood in the hallway of the theatre gabbing about Jean-Louis Trintignant and Un Homme et une Femme (of all things). Amour surprised on nomination morning with a Best Director nomination (which I was expecting) and a Best Picture nomination. It will certainly win for Foreign Language Picture, but I think Spielberg, Lee, and Russell might split the votes here and Amour will also take home the Best Director Oscar. If it does, it will be well deserved.
Will Win: Director, Foreign Language Film
Could Win: Actress, Original Screenplay
My Rating: #4 out of 61
Posted by Aaron C. Thomas at 12:49 AM