I must confess to being slightly bored by The Assassin (刺客聶隱娘), which isn't to say that Hou Hsiao-hsien's movie isn't good, because it is good, I just did not find it very compelling. 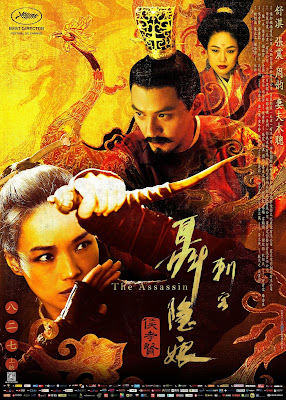 You might find on the internet that The Assassin is a martial-arts movie; I suppose that is true, technically, but with Zhang Yimou and Wong Kar-Wai and Chen Kaige making films that are included in that group, the genre indeed doesn't mean very much except that people fight with swords in the movie, and usually also fight hand to hand.

The best part of The Assassin to my mind is its absolutely riveting, even breathtaking costume and production design (both by Hwarng Wern-Ying). The work is gorgeous. The Assassin is also impeccably shot and masterfully directed. Hou's vision is carefully realized.

But... half of the time I wasn't really sure what was going on. More than once, I found the protagonist fighting someone and I wasn't sure whom she was fighting, what happened during the fight, or where the two combatants left things at the end of their fight. And because Hou is more interested in locations and the frame – the way that the audience is allowed to observe the characters – than he is in the characters themselves, I found myself puzzled over the main character's motivations, her loyalties, and most importantly the moments she decided to change.

I am sure I figured all of these plot points out by the time the film ended. But the film's premise – that a young assassin fundamentally owes something to the Taoist nun who trained her to be a killer and should kill whomever she says merely because she says it – still eludes me.

The Assassin is gorgeous, but I think that may be all I have to say about it.
Posted by Aaron C. Thomas at 9:36 PM No comments: