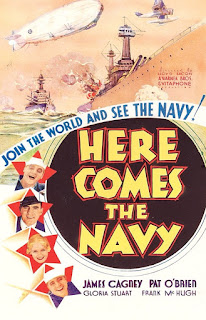 Here Comes the Navy is some kind of you-guys-should-join-the-navy promotional movie with Jimmy Cagney. Not sure why this got made in 1934, but it did. I thought it was dumb.
Posted by Aaron C. Thomas at 12:19 AM No comments: 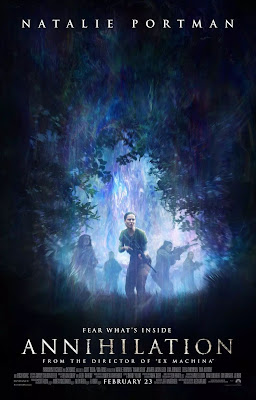 Annihilation has a lot of good ideas – well, it has one or two good ideas, but the film is a failure. The thing in its entirety just doesn't work. The movie wants to ask us to think about being, about what cells are and what it means to be an I if our cells mutate constantly. Annihilation uses the fact that our cells deteriorate over our lifespans to ask us to think about what it would mean to instead become something else, to become something new and different than whatever we are. This is all good and well, and it is actually quite an interesting question.

But, in the first place, Natalie Portman is the wrong actress to get us to think about these questions. She is primarily a reactive performer, and so she doesn't appear to be thinking actively about the questions the film poses. Instead she seems simply to respond to whatever the film throws at her. It didn't attack me; it mirrored me, she says of The Shimmer, late in the film, and that's what Portman does, too. She looks seriously and anxiously at whatever is just out of the frame, but she doesn't really do much more.

In the second place, Annihilation sort of wants to be a monster movie, but then it just can't quite keep it up. Whenever the monsters appear out of the Shimmer (and there are something like four or five of these sequences) I was loving this movie. The Shimmer (whatever it is) creates new things by mixing DNA (this is in the trailer, so don't act like I'm spoiling anything), and so we get to see these crazy looking hybrid monsters and strange (occasionally beautiful) lichens and flowers and trees. There are some even weirder monsters in the film's third act. But, the film disposes of these beautiful things easily, and although Portman stares at them and takes DNA samples, she, like the movie, doesn't really seem interested in whatever version of cell division is happening within the space/creature/Shimmer.

And then there's the ending, which is frustrating and easy. I won't spoil this, but Annihilation opts for an uncomplicated, obvious ending, that left me bored. This ending is no more interesting than the last Alien movie's stupid finale. (One is reminded, too, of Ex Machina's ill-considered ending.)

Still, the visuals are really cool, and (as with Alex Garland's last movie) I spent lots of the movie pondering the particular ontological query that the film proposes. The violence in the film, too, is exciting to watch (this was true of Ex Machina, as well). Garland, it seems to me, is fascinated by both being and by actions designed to destroy that being. His films seem to come alive when they focus on either of these things.

If only Annihilation spent more time thinking about the questions it poses; instead it opts for bad storytelling and a cliché finish.
Posted by Aaron C. Thomas at 12:34 AM No comments: 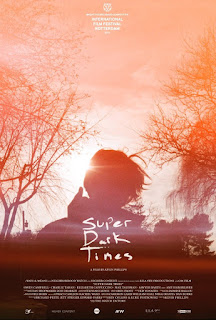 The filmmaking is great here. Excellent script. Very good acting all around. I really liked Super Dark Times even if I find myself skeptical of the whole kids-are-unfeeling-cold-and-merciless message. Still, the whole thing is directed beautifully – especially the film's opening sequence.
Posted by Aaron C. Thomas at 1:53 AM No comments: 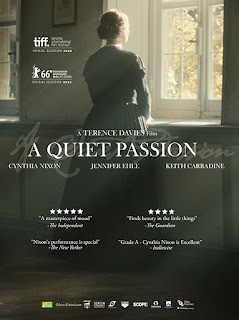 This didn't work for me. It felt too often stilted and too repetitive. There are some great performances, but there are also some terrible ones. It's an odd marriage and Davies is a strange filmmaker. The work is so queer and I always want to love it, but I just don't understand why he makes some of the choices he makes. A Quiet Passion does actually make me like Emily Dickinson a little bit more. I will admit that.
Posted by Aaron C. Thomas at 10:53 AM No comments: 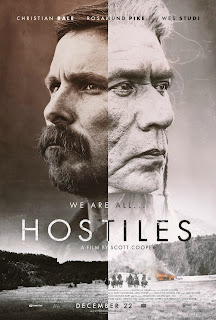 The parts of the whole of Hostiles are better than their sum. Mostly this is the director's and screenwriter's faults; everyone else is doing very good work here.

This has an excellent cast, with some truly superb performances, and the whole thing looks breathtakingly beautiful. But Hostiles is a little too in love with itself, so it outstays its welcome. Nearly every scene is slightly too long, and then the film itself has three endings. Hostiles' three endings are an indication of a Spielberg-esque tendency to attempt to wring emotion out of us by the end, as though a fine story isn't quite good enough. Rosamund Pike, too, who I normally like a lot, flounders in Hostiles. I blame the script. The screenplay just isn't tight enough, and seems to need to do everything it does twice.

But damn does this thing look gorgeous. Its score and cinematography and production design are just beautiful. No one saw this in time for the Academy Award nominations – it was released way too late, the distributor had no awards-season experience, and Hostiles isn't nearly enough of a crowd pleaser in the first place – but this movie definitely should've been nominated in some of those technical categories.
Posted by Aaron C. Thomas at 9:58 AM No comments:

Les Orgueilleux (The Proud Ones) 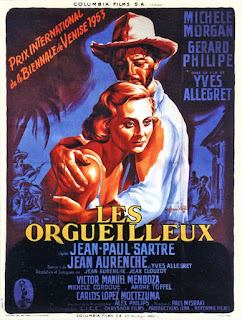 Excellent. And Gerard Phillipe is great!
Posted by Aaron C. Thomas at 11:41 PM No comments: