Hollywood loves itself, and movies about old Hollywood seem to arrive on the scene every year. Last year we had the abysmal Trumbo, but not so long ago, we had The Artist, which was delightful and went on to win Best Picture. And, incidentally, I really liked Hail, Caesar!, this year's Coen Brothers spectacle. This year's winner will be about Hollywood, too, (I'm talking about La La Land, obviously), but it will be a different kind of nostalgia trip that three movies I'm reporting on today were. 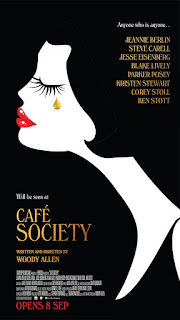 First, a movie that is already on DVD, Woody Allen's Café Society. Is this movie about café society in New York? I guess it is. But more importantly this movie is just bad. Jesse Eisenberg plays a young Jewish kid and neurotic Woody Allen surrogate, who falls in love with a woman he can't have. Fine. That part of the film is actually sort of interesting.

The really bad part is Steve Carrell as his movie-mogul uncle. The film is filled with name-dropping absurdities. Carrell informs us that "I'm expecting a call from Ginger Rogers" or some other nondescript idiocy. There are no actors in Kate Hepburn or Hedda Hopper drag, and actually I can't believe that I am about to say this, but I think the film could've been improved by that camp gesture that usually so annoys me. I say this because without actors in drag as famous people, Café Society feels like a hermetically sealed Woody Allen universe that has no attachment to reality in any way. I never for one moment believed Steve Carrell was a movie executive, I never believed he had lunch with Errol Flynn, and I never, for that matter, even believed he lived in Los Angeles.

As I've said before about this period of Woody Allen's career, I feel like Allen can still write a movie – the premise and ending of Café Society are intriguing – but he no longer knows how to direct one (cf. Magic in the Moonlight, Blue Jasmine, To Rome with Love). Café Society feels phony in the extreme, filled with caricatures on movie sets doing things that real people never do and saying words that sound like bad readings of a Woody Allen screenplay. I still feel an attachment to Allen's universes, and that's why I saw this, but if you care about yourself, you will skip this film.


* * *
And then there is Rules Don't Apply, the first film by the great Warren Beatty since 1998's Bulworth. (Honestly, how is that possible???). This is actually a fairly charming little movie, although it does wear out its welcome after awhile.

Beatty has said that Rules Don't Apply is not a film about Howard Hughes, but is instead a movie about two young people who get caught up in Hughes's world. The two have been damaged by Christianity so much that they feel like they can't love one another even though they do. All of this is true. the film is about that, but Rules Don't Apply has Howard Hughes in it, and Hughes is too large a character for the film to be about anything else. Rules becomes about Howard's strange peccadilloes, even if it wants to be an old-fashioned love story about two kids overcoming silly Christian mores.

The storytelling here is charming, though. Lily Collins, Alden Ehrenreich, Beatty himself, Annette Bening, Matthew Broderick, Candice Bergen, and the other (numerous) actors who appear in the film are all absolutely delightful. And the whole thing has a delightful whimsy that didn't wear thin for me, even though the Rules as a whole feels fairly shallow.

Perhaps most disappointing about Rules is that it isn't going to get any Oscar nominations. Or... well, actually, I actually think the song "The Rules Don't Apply" actually deserves a nomination, and may garner the film its only one. It's just not a deep enough movie, glamorous and cute as it was.

* * *
Last but certainly not least is Jackie from Chilean director Pablo Larraín, who has had three movies released in the U.S. in 2016 (The Club was earlier in the year and Neruda is in theatres now). 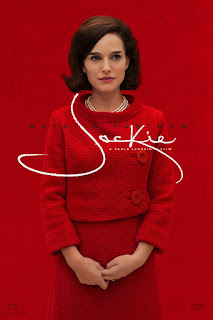 Jackie is an intense character study of Jacqueline Kennedy from just before the president is shot and killed to the end of his funeral procession. The form of the film is odd, though, and this is most clearly marked by Mica Levi's dissonant horror-film score, which either makes or breaks the film, depending on your perspective. But Jackie is not Jackie without this score. Levi's music is overwhelming, insistent, and always troubling. As Jackie interacts with Robert Kennedy, with Rose Kennedy, with Jack Valenti, with Lyndon Johnson, one has a constant sense of disturbance, disruption, even terror. It's a very jarring effect.

I thought Jackie was a weird movie. I rather appreciated what it was trying to do, but I can't say that I enjoyed it. I liked its version of character study – one that takes stock of a person in crisis and then makes judgments about her based on the decisions she made during this very difficult time. Jackie has a great deal of affection for its central figure, but is also deeply suspicious of her, sees her as fundamentally flawed, ambitious, vindictive, perhaps even shallow. This makes the whole thing complicated and interesting, certainly, but... well it just isn't all that pleasurable. I found myself growing impatient with Mrs. Kennedy, with her tics and her wealth and her pretensions ("I don't smoke", she tells a reporter, though she has been chainsmoking throughout the entire film).

Jackie is going to get a single Oscar nomination for Natalie Portman (and maybe could net one more for Costume Design), but I can't see this picture connecting with audiences in a big way.

In fairness to Larraín's movie, I will say that my central thought while watching the pageantry of Jack Kennedy's funeral was about how classy it all was. Say what you want about Jackie Kennedy, she had class. How far we have fallen! We are about to install the most vulgar, classless president in American history into the White House, and the new First Lady won't even be moving into the house where Jackie, Caroline, and John Jr. lived. It is very hard not to think about President-Elect Trump while watching Jackie, and it may be that, finally, that makes the movie difficult to watch.

More movies to come! I'm seeing lots of them.
Posted by Aaron C. Thomas at 1:21 PM