The Knight of Cups, the Melancholy Drifter

I can totally see why no one liked Knight of Cups, and indeed (especially after To the Wonder), why people are wondering if Terrence Malick has simply run out of things to say. 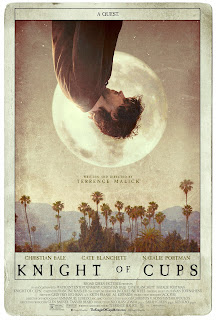 Knight of Cups includes Malick's usual lush, gorgeous imagery, and his typical whispered voiceovers, but this film is not The New World or The Tree of Life. The subject matter here is Christian Bale playing a kind of washed up or tired screenwriter who has no subject matter to work on. (If, indeed, Malick himself is the screenwriter who can't think of anything to say, this makes a great deal of sense, but I don't think I'll go there.) But this isn't a film about Hollywood or screenwriting or Los Angeles, really. Sure, it is filled with gorgeous images of Southern California, certainly – from Descanso Gardens to Santa Monica to Hollywood Boulevard to Skid Row – and there are some great sequences in Las Vegas, with beautiful, stunning images. And the parties in Knight of Cups are also really fun, although they lack the energy and wit of the parties in, say, The Great Beauty or even, dare I say it, The Great Gatsby.

That is because Knight of Cups is not a film about Hollywood moviemaking or money or Vegas or even Los Angeles. It's a film about a man and "the women he has loved" or somesuch nonsense. And the Malick voiceovers, therefore, are all inanities about romance and losing a person and things like that. When Natalie Portman says, somewhere in the film's third act, "I know you have love in you", I couldn't help but roll my eyes. Why does it matter whether you think he has love in him or not? What I mean to say is that Knight of Cups' subject matter is just not compelling. I actually even think that this film would have been better without the voiceovers – I am fairly certain I would have liked it better if it had simply been a series of images of him with these various women, his brother, his dad, and the few bits of actual dialogue we got. Instead, the voiceovers dumb everything down, and they are so short and clichéd that they seemed to me like finger painting on the surface of a Rothko.

Still, the images: They're stunning. Nearly every frame bursts with beauty. And it was a pleasure for me to see Los Angeles itself photographed so gorgeously. Most of the actors, too, do lovely work. Armin Mueller-Stahl and Antonio Banderas were particular highlights, to my mind. I still think the film is unmissable. I wouldn't have skipped it, even if I didn't love it.

And I am not going to worry to much about Malick and whether he's lost his mojo. He is the master and this is what he's interested in right now. Eventually he's gonna work through whatever he's working through about love and masculinity, and young women frolicking amid blowing curtains, and then maybe we'll get something else. He doesn't owe me anything.
Posted by Aaron C. Thomas at 12:33 AM