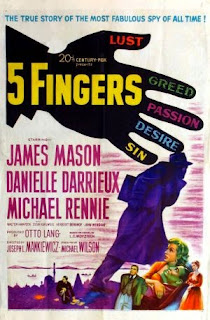 After All about Eve, Joseph L. Mankiewicz directed a WWII spy picture called 5 Fingers, about a British agent (whom I think we're supposed to love) who is actually selling state secrets to the Germans and making a fortune. The film stars James Mason and Danielle Derrieux. This is also apparently a true story.

5 Fingers was not at all what I was expecting from the director of A Letter to Three Wives and that 1963 Cleopatra, I have to be honest. But 5 Fingers is a taught, dark little film noir that has an intensely bleak world-view. It's quirky in its own way – I'd expect nothing less from Mankiewicz – but it's also taught and intriguing and (most strange for a movie from 1951, it seems to me) morally ambiguous. What I mean, I think, is that this film doesn't exactly say that what our (criminal) protagonist does is ethically wrong. This, even if 5 Fingers had nothing else to recommend it, would be enough of a reason to see it.

5 Fingers is no Purple Noon or Les Diaboliques, but it is pretty great for a big studio picture from 1951.
Posted by Aaron C. Thomas at 11:42 PM