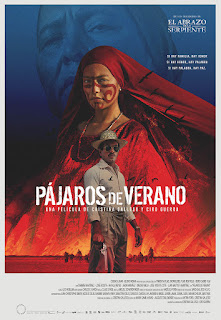 For me Pájaros de Verano (which is being distributed in the U.S. as Birds of Passage) didn't quite work. The feelings in it are just a little too restrained; the direction feels almost cold, which simply doesn't fit with the subject matter here – family crime melodrama. I really liked both of the film's stars, Carmiña Martínez and José Acosta, but again I wish both of them had been allowed to let loose a little bit, especially at the film's end. As it is, the film's first act, which has the least amount of action in it, ends up being Pájaros de Verano's most compelling section. It's a shame, because Ciro Guerra's Abrazo del Serpiente was my favorite film of 2016. Oh well. Pájaros de Verano looks cool, anyway.
Posted by Aaron C. Thomas at 11:31 PM