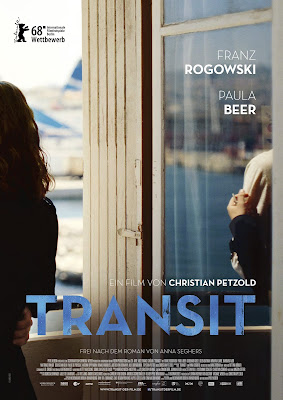 Transit is haunting and very, very smart. Christian Petzold is such a good director. I really liked this and boasts some brilliant performances, especially Franz Rogowski. Furthermore, and most interestingly, Petzold has adapted Seghers' novel from its WWII setting to the present day, but we still have cleansing and occupation and terror. All of Petzold's films so far have been about World War II, but with this movie it is clear that he is asking us to think differently about World War II, and perhaps that none of his films has been about World War II at all. Instead, Petzold deals with serious ethical quandaries and real desperation.
Posted by Aaron C. Thomas at 12:39 AM