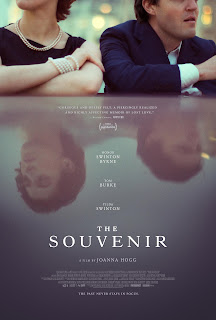 The Souvenir was a hit at Sundance, and I am baffled, bewildered, and beguiled. My god this film is bad. This is about a young, idiotic woman who begins dating a heroin addict. She doesn't seem to see this as a problem, even though he steals from her, gives her nothing, and is a complete and total downer at all times. He brings her on his scores, and she just seems fine with it. It's an insane story.

But the worst part is that, frankly, about an hour into The Souvenir I started wondering why he was with her. This drug addicted loser was actually the most interesting thing about this foolish woman. As for the movie itself: it is tedious beyond measure. It's a throwback to '90s mumblecore, and not in a good way, if there ever was a good way to be '90s mumblecore. I was completely bored out of my mind by this movie.

I saw Gaspar Noé's Climax in 2019, so The Souvenir can't be the worst movie I see this year, but it will be close to the bottom, I can tell you that.

Update: apparently, Joanna Hogg is making a sequel to this movie called The Souvenir Part II! I do not know who asked for this, but it was not me.
Posted by Aaron C. Thomas at 12:31 AM