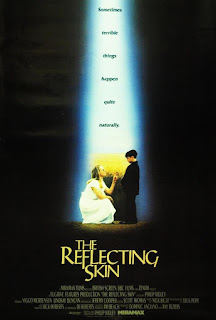 Oddly enough, The Reflecting Skin was not as weird as one of Philip Ridley's plays. But make no mistake, this is a very, very weird movie in which a young boy's friends and family all begin to die very mysteriously. First his friend is found dead, drowned in the family's well, and then his father lights himself on fire after fellating a gas pump. More deaths ensue. The script is actually pretty good, but it's directed (by Ridley) with almost total ineptness. One really has almost no idea what is going on, and the twist of the film is never really communicated to the audience, even at the very end. It's a strange, strange picture.
Posted by Aaron C. Thomas at 11:21 PM