Joker is pretty good at what it wants to do. Joaquin Phoenix's performance is chilling and very scary, and the movie itself is quite scary too. The thing is, though: I didn't really enjoy this very much at all. Even the third act triumphant revenge sequences were joyless to me. The first act is so relentless in its beatdowns of this poor man. It's one-note, almost (dare I say it) comedic (although it never really is this), in the pain it delivers at this man's doorstep. 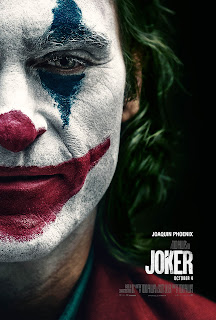 I don't, for the record, think the movie is irresponsibly violent or anything like that. Joker is fairly careful about its violence. Consider, for example, the sequence in the non-girlfriend's apartment. The film actually works to make us afraid for the young woman and her daughter. We will for nothing to happen to them. We hope he doesn't hurt them. I felt this same way with his diminutive coworker who comes to visit and witnesses him killing the other guy they work with. Please don't kill this guy, I thought. And of course he doesn't.

It's clear in these moments that Joker is a sentimental movie in its own way. It doesn't wish death and destruction on everyone, or at least not quite everyone. Little people and mothers with young children are spared this film's wrath. The rest of the universe, however – as we find out at the end of the movie – can simply burn, and society itself should be utterly destroyed. But save the children and the co-workers who smile at you.

If only any of this had been pleasurable. But the relentless of the first act of Todd Phillips' film set me up, as a viewer, only for more of the same. For me, Joker never really let up from this tone, and I had trouble enjoying any of the film after act one, even if I knew we were sort of supposed to take pleasure in the finale. I found the whole thing off-putting.  It's just not any fun.

Oh! One more thing that I can't get out of my head. When the three guys come to beat him up in the subway – the guys he kills, I mean – they're singing a song from Stephen Sondheim's A Little Night Music: Isn't it rich / Are we a pair / Me here at last on the ground / You in midair. They even seem to know the second verse. Now, these are supposed to be young businessmen who work for Thomas Wayne, and given that this film is supposed to take place in a version of 1976 (I infer this from the numerous references to Lumet & Chayefsky's Network and Scorsese & Schrader's Taxi Driver throughout the film) and Sondheim's musical premiered in 1973, I suppose it's possible that these young businessmen might have committed "Send in the Clowns" to memory, but I find this improbable. Perhaps it is simply much more likely that the joker is psychotic and that the scenario the film shows us, in which he kills the three men, is just as fictional as the sequence two scenes later when he kisses his neighbor. My point is that we can't even trust what we see in the movie. What I guess I hope this means, after all, is that this joker is misinterpreting the ugliness and brutality of the world around him and that it just ain't all that bad. Either way, the joker's read on the world is not a perspective I have the ability to enjoy. I need a few more jokes.

Update. My friend George reminds me that "Send in the Clowns" was actually a pop-crossover hit. Witness this appearance by Judy Collins on The Muppet Show in 1973: