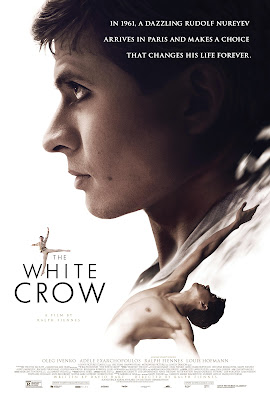 The White Crow is a film about Rudolf Nureyev's defection from the Soviet Union when he traveled to Paris to dance in 1961. It's fine. To my mind, though, this movie isn't gay enough, but it is based on a particular book, and maybe what I mean is that the book isn't gay enough. In any case, it's not gay enough.

Is Ralph Fiennes getting better as a director? Maybe. I don't know. I'm not sure he really has hit upon a vision of any real kind yet. I'm not sure what this movie is trying to be about except an appreciation for European art. Not that there's anything particularly wrong with that; it just feels rather old school.
Posted by Aaron C. Thomas at 11:10 PM