I would like The Lighthouse better if it weren't all so obviously supposed to mean something. Thomas (Robert Pattinson) is a younger man doing a few weeks of work on an island, working at a lighthouse doing gruntwork and laboring in the service of an older, craggy former sea-captain also named Thomas and played by Willem Dafoe. They both begin to go insane – or maybe it is just Pattinson's character who goes insane and Dafoe's character is the cause of it. The older man is also keeping the younger man from accessing the shining light at the top of the long, winding staircase inside the lighthouse. It is clear from the beginning of The Lighthouse that the younger man wants to behold the light, to tend it and care for it in the way the older man is able to do, but the older man locks the grate and keeps the younger man out. 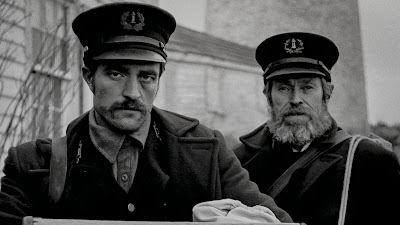 Robert Eggers' newest film, then, is about a descent into madness – fine; I think that's super interesting, and it makes for an intriguing follow-up to his earlier film The Witch, also about madness and an inability to trust what one sees.

But in The Lighthouse, Eggers gives us a descent into madness that is supposed to be symbolically weighted with meaning: The man who sees the sun must die, and Prometheus, who steals fire from the gods must have his liver eaten by eagles (seagulls in this film's final tableau).

I thought this movie was fun (and actually quite funny) to a certain extent. But I found most of its attempts at a depth of profundity to be shallow. The real depth in the film is in its beautiful photography and excellent production design – in other words, on the film's surfaces. 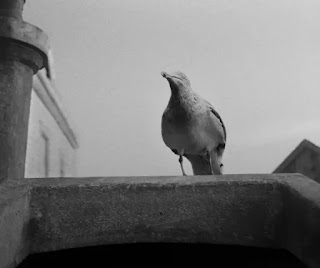 As for deep meaning, one could try to suss some out, and the movie itself seems to prompt this. You can google and find webposts that say things like "the end of The Lighthouse explained! – maybe the two Thomases are really the same man, or perhaps the two Thomases and the seagull are all the same person, or perhaps the younger Thomas is haunted by demons he brings to life himself, or maybe the whole thing is an intense allegory à la Mother! – but the surfaces of The Lighthouse are always more interesting than its purported depths.

I'll be honest: Willem Dafoe isn't really my cup of tea. I think he's really fun in comedy, but as a serious actor, for me, he overdoes things. I think Pattinson is great; that's not really up for debate. But the movie as a whole... eh.
Posted by Aaron C. Thomas at 3:53 PM