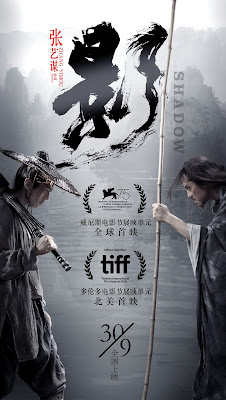 Shadow (影) is quite a silly film.

I should start by saying that this film's costume design (by Chen Minzheng) and the film's production design (by Ma Kwong Win), are easily some of the best work this year. Both designers have already won the Asian Film Awards and the Golden Horse Awards in their respective categories for designing Shadow.

The film also has a few affecting moments; the performances by the two leads are excellent, for example. But, as usual, Zhang's impeccably gorgeous, slow, bloody spectacles are not to my taste. This felt empty and occasionally even totally nonsensical in its pageantry.

But this is how I always feel about Zhang's movies these days. They look beautiful, yes, but they're not about anything. They're not even really studies in aesthetics. Instead, they're melodramatic machines – they work like little clocks or puzzle boxes – and usually they work well, but once you've gotten inside, there isn't anything there.
Posted by Aaron C. Thomas at 8:25 PM