Let's talk about Frozen II. The cast and the directors of the original 2013 film have reunited, and we've been given a chilly but not-quite-lukewarm sequel.

As with the original Frozen, the best part about Frozen II is the songs. Robert Lopez and Kristen Anderson-Lopez have composed some really great tunes, and I loved all of the things that made me fond of the original – 1) the film is actually a musical in which characters actually sing, 2) the film stars Broadway singers and not Hollywood actors who have trouble singing, 3) most of the songs are really incorporated into the film's narrative in a seamless way. And what Frozen II does that Frozen does not do is continue the songs through to the film's end. This is a good thing.


The best song in Frozen II is Jonathan Groff's amazing Phil-Collins-Peter-Cetera-Freddie-Mercury-inspired number "Lost in the Woods". It's completely hilarious. It's filmed and orchestrated like an '80s music video, and I laughed and laughed. It's easily the best thing in the movie.

But the plot of Frozen II leaves a great deal to be desired. A great deal. In fact, the whole thing doesn't make very much sense. I am most confused about the way that Elsa's magic interacts physically with the "natural" spirits of Earth, Wind, Water, and Fire. Her magic seems to tame these elemental spirits in some sort of way. I don't really get that. There is also a fifth element in this movie, and if you've seen The Fifth Element, you can probably predict where that plot point is headed.

I am also very skeptical of the liberties the film took with exposition. Now we find out that mom and dad aren't who they said they were, and they didn't die the way we were told they died, and (apparently) there's a haunting lullaby that Elsa and Anna always sang to one another – except that they didn't do that in the first movie. Anyway, all of this is suspect, but apparently necessary for this plot to function.

And for me, the plot is the real trouble into which Frozen II wades. See, Frozen II is a colonialist fantasy. Make no mistake about it, while this is apparently a film about the far-off kingdom of Arendelle and its relationship with an enchanted kingdom to the north called Northuldra, what Frozen II is really talking about here is U.S. relations with indigenous American ethnic groups. The Northuldra, in addition to living in harmony with the spirits of water, earth, wind, and fire, are also very clearly drawn to look Inuit. These are indigenous people, and we find out that...

Ok stop here if you haven't seen the movie yet, because I'm about to spoil a plot point or two.

Apparently Grandpa Arendelle (I forget his name) actually killed the leader of the Northuldra, and he was attempting to make them completely dependent on his own power. He also installed a dam, which totally disrupted the natural flow of water and animals in the ecosystem of the enchanted forest. If you're not thinking of the British, French, and Spanish colonization of the Americas, then you're totally missing the plot here. (Now, there are other indigenous groups, too, like Native Hawaiians or the Sámi of Northern Europe, whom the film could be referring to, but this is a film made by U.S. Americans, and our national colonialist fantasy seems to me to be what is driving this narrative.) 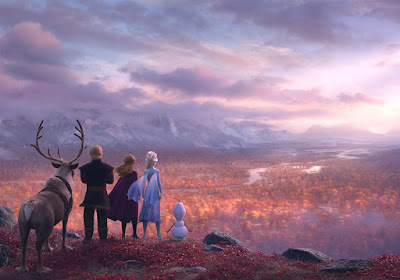 What Frozen II offers is a series of colonialist fantasies in which indigenous people need the colonial power in order to survive. In Frozen II the wisdom and knowledge of the colonists solve the problems of the indigenous people (it is the colonists who free the forest from its enchantment). Except, of course, that the plot twists, and we learn that Anna and Elsa aren't colonists so much as they are really good white ladies who find out that they are actually ... half native. In this way, Frozen II invests in the 23andMe approach to ethnicity, whereby Anna and Elsa can be indigenous and profit from the fact of their indigeneity even though they have only a tenuous cultural connection to the Northuldra and haven't grown up in a land without a sky as Honeymaren and Ryder have. Instead, we find that Anna and Elsa are (cellularly!) a combination of indigenous wisdom and white racial (genetic) superiority. And because of this, they can use the knowledge shared with them by the indigenous folks to solve the film's mysteries and inaugurate a new way of life for Arendelle and the Northuldra. So far this is a fairly common U.S. American colonial narrative.

Now, this fantasy is, it must be said, not a fantasy in which the indigenous population is eradicated. This is not one of those "last" narratives that Jean O'Brien has critiqued (like The Last of the Mohicans or The Last of the Wampanoags) in which the native people all die and bequeath their wisdom to the white colonist. No. The Northuldra get to live in this narrative. At the end of the film they run with the reindeer and they live in harmony with nature in the forest in the north. But this is precisely why I am calling Frozen II a fantasy. The lie this film is selling is that in this narrative the native people get to keep their land. That is not what happened in the Americas. And Native American (and Native Hawaiian) land rights continue to be contested, flouted, and otherwise ignored by various state governments and by the federal government of the United States. In the fantasy of Frozen II (unlike in the United States), the residents of Arendelle apologize for attempting to murder the Northuldra and disrupt their way of life, and then they go back to Arendelle.

I hear you waiting to object: No, Aaron. Frozen II is a story of sharing, of cultural contact, of shared love of land, family, and nature. It's about making things right that granddad did wrong. Yes, it is that. But the reason that is a fantasy is that it does not reflect the history of colonial-indigenous relations in the U.S. Elsa and Anna, as it turns out, didn't even have to give up the city of Arendelle. It is saved from the flood caused by the broken dam ... by another dam (this time a magic one).

And where were the indigenous actors? The Northuldra – who are all very plainly drawn to resemble First Nations people – are played by Evan Rachel Wood, Martha Plimpton, Jason Ritter, Rachel Matthews, and Alan Tudyk. If the film were actually about respecting indigenous ideas or cultural contact or some ideals like that, wouldn't it make sense for the film to use some Native American actors? But the film isn't about cultural contact or shared love of nature or whatever. It makes sense for all of these white actors to be playing these native characters because these characters are a mere colonialist fantasy of indigenous people.

As I say, the songs are good. (I thought the pop version of "Into the Unknown" that Panic! At the Disco sang over the end credits was a bop). And I laughed out loud at the hilarity of Kristoff's song (I am glad Jonathan Groff finally got to sing in the sequel). But the film's politics seem to me to do more harm than good, offering a myth of colonial-indigenous relations that differs as widely from the historical record as the myth of the Thanksgiving holiday on which Frozen II was released.
Posted by Aaron C. Thomas at 10:17 AM