It seems to me that the popularity of Jojo Rabbit with so many festival audiences is surely due to the total dynamism of little Roman Griffin Davis, who plays little Jojo. 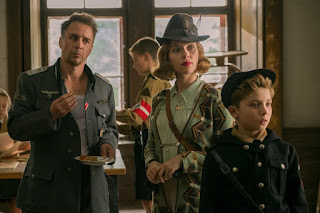 This film by Taika Waititi is a tongue-in-cheek look at a little wannabe Nazi whose mother is working for the anti-Reich resistance and whose father and sister are gone. Little Jojo sees Hitler like an imaginary friend, and Hitler (played by the director) encourages Jojo and gives him hilarious little pep talks.

Jojo Rabbit is funny for a while, but then, you know, the Americans bomb Berlin and kill a lot of people, and long before that there are Nazis doing evil things, like, you know, carrying out a genocide. And, as it turns out, Jojo Rabbit is mostly just not funny. 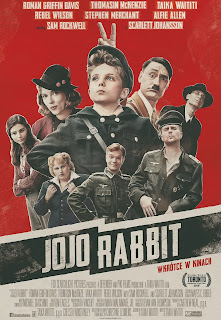 I mean, it is funny, or somewhat funny, but it is impossible to forget – and Taika Waititi doesn't even want us to forget – the actual violence and genocide. (I felt this same way about The Death of Stalin last year. This is a comedy about a topic that is basically not funny. Many, many people died. This is a time for jokes?) Thankfully the director has written moments of terror and moments of deep sadness into his script, so that the broad comedy of the film's first act is balanced by seriousness and grief.

Or... that would be true if it were directed differently. Instead what we have with Jojo Rabbit is a very good script that was poorly directed. Waititi understood on paper what the film needed to be, but he wasn't really able to execute that. And I say that as someone who really liked Hunt for the Wilderpeople. I think Waititi can do comedy very well. He hasn't figured out how to balance that out with anything else yet.