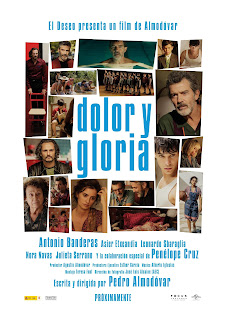 My favorite movie of the year so far is Pedro Almodóvar's new film Pain and Glory.

It is absolutely gorgeous. This film has all of Almodóvar's hallmark auteur traits – the narrative doubling and tripling, drug use, frustrated desire, melodrama, bold Sirkian colors – but the filmmaking itself is wonderfully personal and restrained, so gentle and careful. It's a lovely, lovely film. A kind of Almodóvarist 8 1/2.

I think what I loved most about Pain and Glory is the way that Almodóvar, without flinching, examines his own terrible behavior, his own pettiness, his fears about how his mother felt about him, his terror of growing older.

In a typically Almodóvar move, the character who is the version of Almodóvar in the movie (Antonio Banderas) writes a story about himself, and then that story is recounted, movingly, by another actor (Asier Etxeandia) as though it is his own story. But this is how Almodóvar's films work, they never allow you to access the true story, the real one, because there is no essential version of any one story, and that story is not one person's to possess.

Oh and the acting is magnificent: Etxeandia is best in show, but Leonardo Sbaraglia is also just fabulous, and of course Banderas and Penélope Cruz (both beautifully understated) are just lovely.
Posted by Aaron C. Thomas at 12:04 AM