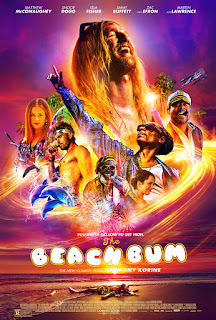 The Beach Bum was crazy and occasionally funny.

Hot take:
It's also shot just like a Terrence Malick movie, and perhaps also uses many of Malick's filmmaking techniques. This is a strange movie to compare to Malick – since Korine's film is invested in pleasure and being high on life (Malick's films are never that), but the filmmaking really is similar.

In any case, The Beach Bum wore me down after a while, and its hedonism began to exhaust me. This is not Spring Breakers.
Posted by Aaron C. Thomas at 1:49 AM